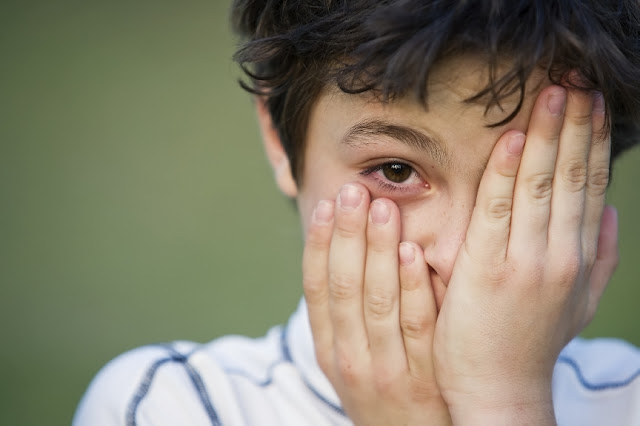 A rash from measles features large red blotches that have a flat surface and tend to group together.

The rash may show up within one day to a couple of weeks after exposure to the virus.

It may begin at the base of the hair line and move down to the face of the sufferer, to the neck.

The rash tends to stay in an are for three days, then moves outward and downward.

Gradually, the rash spreads, moving down the body to the hands and feet. as it fades, the rash may turn a brownish color before fading entirely.

The virus clears up and the sufferer recovers with rest.

Measles or rubeola is an extremely contagious illness that is caused by a virus that belongs to the genus Morbillivirus of the Paramyxoviridae family.

Coughing and sneezing can propel contaminated droplets from the throat, mouth or nose of one who is infected.

Contact with these droplets spreads this infection to others.

Transmission can occur four days before the appearance of the measles rash and four days after the rash first appears.

The virus resides in the mucus of the throat and nose, and the illness is considered to be a respiratory system infection.

The virus itself can remain contagious and active for up to two hours on an infected surface.

The ease of transmission means that if you have not been vaccinated you will likely get the illness sooner or later.

When the measles virus is transmitted to a person he or she does not immediately become sick.

The virus makes it way to the throat and lungs where it can multiply.

After eight to twelve days the symptoms begin.

The incubation period is the time between the initial transmission and the first appearance of the symptoms.

The measles rash usually appears three to five days after the initial signs of illness appear.


The rash may last from four to seven days, and it typically starts at the head and spreads downward to the extremities.

The measles rash can appear as macules (flat, discolored areas) and papules (solid, red, raised areas) that may overlap into large blotches.

The rash is accompanied by a spike in fever. so children should be treated with ibuprofen or acetaminophen instead of aspirin so that Reyes Syndrome can be avoided.

The rash may be itchy, and it is said to ‘stain.’

This means it changes color from red to brown before vanishing. Complications of a measles infection may be ear infections, pneumonia, bronchitis and encephalitis.

Children under age two typically receive the injection as part of their routine vaccinations.

Sometimes the youngster may have a reaction that looks like the measles rash, but it is not measles.

Some parents have refused the vaccination for their children due to unfounded fears that the vaccine causes autism.

However, studies have revealed that there is absolutely no connection between autism and the vaccine.

Measles is a viral respiratory infection that is very contagious and is spread through contact with an infected person via nose and mouth fluids.

The infected person may share the virus through direct or indirect contact (this means that when a person cough, sneezes or talks, droplets fly throughout the air and may infect another person as they inhale them).

Someone with measles will feel cough,  tired and have body aches and irritability.

Besides a rash, which happens a few days into the illness, the first signs of the virus are fever of 104 to 105 degrees.

Other symptoms include sore throat, eye infection, runny nose, and a persistent cough.

Following this, the sufferer will get what are known as Koplik’s spots, which are a sure sign of measles.

Koplik’s spots are red sores with a whitish center that show up in the inside of the mouth and on the tongue.

They may also appear on the white areas of the eye and in the intestines.


When to See a Doctor

Generally measles clears up on two weeks, but some of those infection do suffer from complications.
A cough is one of the longest lasting symptoms measles.

A common complication of measles is an ear infection. A more serious one is pneumonia, form a weakened immune system.

Check with the doctor if signs of pneumonia occur, such as shortness of breath, chest pain or production of phlegm.

Since it is a respiratory infection, measles may lead to laryngitis, bronchitis or croup in children.

If you experience inflammation of the laryngitis, or bronchial tubes, seek medical attention.

Children suffering from croup have a cough hat is loud and sounds like a barking noise. It generally affects children under the age of six.

While croup isn’t life-threatening, a medication may need to be prescribed by a doctor.

Rarely, people who suffer from measles may acquire encephalitis. This is a swelling of the brain and symptoms include vomiting, fits of convulsions and coma.

This is a serious disease and may occur after the illness or much later. Only one in 1,000 people will get this illness from measles.

Since it’s a highly contagious virus, it may be heard to keep measles at bay, but after touching an infected surface or person, try to avoid putting fingers in the mouth or nose and avoid rubbing the eyes.

The best way to avoid them is to get a measles vaccine before the age of 18 months, and to make sure you get enough Vitamin A.

People who lack the vitamin in their diets tend to be more susceptible to the virus, or at least to acquire more sever symptoms.

Pregnant women especially must avoid measles as it can lead to miscarriage, or even to birth defects.

Another symptom is premature labor or a baby being born with a low birth weight, which can cause health problems.

Is this Measles Rash : know the symptoms and how to avoid it article helpfull for you.? Please share your and family to update them.

Causes of Gout and uric acid symptoms in men and women

MUST READ: What Are the Best Methods to Prevent Diabetes?

9 diabetes signs and symptoms that help you Detect